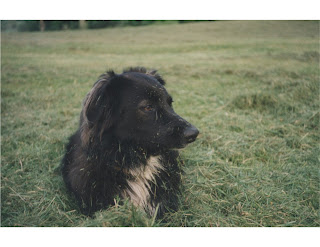 Once squeezed into the four inches under the armoire; once

Small as a hand; once nearly

Fictitious, mischievous, self-permitting, round and

Now my friend, not shadow, but gone --

Off in the distance tail flying, arc a streamer, reminder, smudge;

A gay tail they call it, proving bad for work but good for black dog.

She has a smile. She eats her oatmeal with meat and greens.

She draws the world in bounds and springs,

Then later she sleeps once more, while overhead beyond the couch

We spy silver planes now changed to lines of light in the dark.

They move distantly past a thin curved moon

Dog, black dog who is here at this moment

Far from me but closer than you know.

Posted by Melissa Holbrook Pierson at 5:30 AM 2 comments:

I keep a list of subjects someday I want to write about, including Why I Love Dollar Stores. That one would be three sentences long. Far lengthier, though, would be my rumination on friendship. What is it, really? The catalyst there is my dear friend A., and the fact that in no sensible universe would we have ever become friends. Me, the suburban Ohio girl who went to what they call "good schools," who dined at holiday time in velvet frocks at a table dressed with Georg Jensen silver. Him, the Italian-Irish punk from the Bronx streets, who served time in Vietnam, jail, and detox of various sorts. Our lives intersected, however improbably, in the park in Brooklyn, and the means of our linkage was the dog community. Then we found out that deep inside we are essentially the same person.

Thus is the insider/outsider structure of deep bonding built. From the outside, to many people, our attitude looked at worst like insanity. At best like something inexplicable. So we learned not to try to explain it. This drew us even closer together. Motorcycles divide the world even more starkly than devotion to dogs.

In a former life, I traveled on two continents befriended and cared for beyond even what my family might do by people with whom I shared only a common love for a marque, Moto Guzzi. And my door was always open to them, too, strangers who could never truly be strange to me. Unknown people were invited to share whatever I could give, and I had absolute confidence they were "all right." It is really not conceivable that someone with criminal intent would arrive on a Guzzi.

Now I am embraced again by a brotherhood of altruists, motorcyclists who are bound together by something that is deep in our human natures, and that requires only the glue of commonality to flower forth. These are my villagers now. Their generosity is sometimes breathtaking. And I think I have found at least part of the answer why, in a new book by Rebecca Solnit, A Paradise Built in Hell, which is an exploration of the utopian communities that spring up in the aftermath of disasters, from earthquakes to fires to man-made devastation. Time and again, people come together under duress in acts of mutual aid that represent the finest that our evolution as social animals has bred us for. We need one another, and for these moments, we become the gift and the giver both. This is friendship. This is my life now.

Posted by Melissa Holbrook Pierson at 5:30 AM 2 comments:

Apparently I am the only person in the world who has problems--deep, deep problems--with the thinking of Temple Grandin. Everyone else falls all over themselves loving her ostensibly profound connection with animals. Myself, I get tripped up over the fact that she is employed by the slaughter industry: a bit hard to claim total identification with the Other in that case. And she knows a bit about dogs--but not enough. She has not read the basic texts. This may be excusable for the rest of us, but for a bestselling author . . . ? Here's my take on her book Animals in Translation. This was originally published in the Village Voice. And I still stand by it.

is no doubt the most famous autistic person we have. She first came to the attention of the public as the subject of one of Oliver Sacks’s neurological studies, in which she described the way she experienced the world as that of “an anthropologist on Mars.” Finding her way on this planet, she discovered an affinity for animals—specifically, that she shared perceptual abilities with domesticated cattle. She has become a valued consultant to the beef industry, responsible for designing humane slaughterhouse equipment that helps dispatch half the animals done in every year in this country. Her profile has risen so high she is employed by McDonald’s to ensure that the Big Macs, while in their pre-edible state, are handled to a standard that will keep PETA relatively quiet.

In a previous book, Thinking in Pictures, she described how her brain functions: not by translating perceptions into words, and thence to concepts, but by keeping input visually discrete. In this more readable book, she has elaborated on the idea that the malfunctioning frontal lobes of autistic brains are more similar to animal brains, with their smaller frontal lobes, than they are to “normal” human brains. She may, as a high-functioning autistic, have succeeded in getting a doctorate in animal science, but at heart she is a prey animal on the plain, alert to every movement in the undergrowth.

Her purpose thus is to rehabilitate animals in the eyes of the humans who for too long have scorned their intelligence. For what goal—psychic ease of maltreatment, perhaps?—she does not assay. But she does give copious evidence, from a far-flung map of seemingly every behavioral, ethological, and biological outpost in the animal kingdom, that it is us who are lacking in the smarts department, at least when it comes to assessing or even noticing different ways of thinking. This is clearly the voice of someone who has endured grave misinterpretation herself; in her 1995 book Grandin wrote, “Some renowned scientist speculated that humans had to develop language before they could develop tools. I thought this was ridiculous . . .” no doubt because she designed tools all the time, and she thought visually, not verbally. (But why not just ask the owner of any dog who by crawling into a lap and depositing something in the hand has turned his human into the ideal tool for holding bones so they might be chewed with optimal vigor?) Here, though, she proves herself hardly outside the usual human pale, for she has been reading the same popular opinions as everyone else: like many, she has confused “language” with “speech.” She corrects herself later with examples of some terrifically complex animal communications systems, notably that of Gunnison’s prairie dog, but first discusses at length how being deaf-mute affects thinking, at one point complaining that it is so little studied a Google search on “language-less people” turns up only nine hits. She might have tried “people without speech”: that one yields 11,300,000.

To those who find themselves daily shocked by the narcissism of humans who contemplate the rest of creation through tiny spyglasses only to find the view uninterestingly circumscribed, Animals in Translation will be clutched to the breast in relief. And then, perhaps, removed a little distance. Because it is ultimately troubling, not for the questions it does not answer—the author is wise enough to say that the probability of animals’ rich emotional and communicative lives coincides with our inability to ever know for sure—but for the ones she does not ask. She claims a native ability to understand animals from the experiential level, yet she often works from the same analytical prison cell we all do, confined by prevailing philosophy. (Certain of her interpretations of dog behavior are likely wrong, which is not just an academic distinction, since it leads to training advice.)

At the beginning of the book Grandin offers the hope that “what I’ve learned will help people start over again with animals,” and at the end she reiterates a desire that animals “have more than just a low-stress life and a quick, painless death. I wish animals could have a good life, too, with something useful to do.” Devoutly to be wished—except impossible, without dismantling the gigantic construct of factory farming, the industry that employs Grandin. She never swims into the dark waters where reside the sharks of debate between animal rights and animal welfare, because she might not come back alive. Yet there is no figure who more perfectly exemplifies that vexing conflict. She goes only so far as to wet her toes at the edge, addressing the apparent riddle of her avowed love for cows giving rise to a career of facilitating their deaths.

One of the true “mysteries of autism” is how a neurological short-circuit can cause extreme emotional dissociation. In , though not her book, it explains a lot.


Posted by Melissa Holbrook Pierson at 5:19 AM 3 comments: