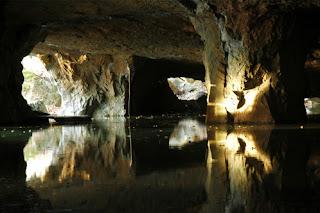 In 1825, the great Delaware & Hudson Canal was being built between two important rivers and passing by a small village called Rosendale.  (The canal remained in use for less than seventy-five years although it represented an engineering marvel of the most excitingly advanced sort. It should thus--but probably won't--give us pause when we become breathless about our own revolutionary devices; they too will be superseded and left to be found, containing only a trickle of water and grown over with vines, by unknowing passersby.)  There, in the rocks alongside the Rondout Creek, was discovered the presence of an especially pure natural cement (dolostone) that soon caused a boom in mining.  Rosendale cement was taken south to the big city and poured into the foundations of the Brooklyn Bridge and the pediment of the Statue of Liberty.

One of these mines, known as the Widow Jane, is both forgotten and found.  Its new use is to transport those who enter: they stand dumbstruck by its enormous mystery.

In the cavern lighted by luminaria whose reflections danced yellowly on the water that stretched back into the darkness three-quarters of a mile, a stage was set.  The place for an ancient rite of some sort--a marriage, a meeting, a prayer.

It is reputed to be acoustically perfect; it certainly seemed so to me, today, when I went for a performance of ensemble taiko drumming.  Appropriately, this is a mix of old and new, rivulets of different traditions joining together in one grand rushing river of sound and sight.  There was dance, masks, flute shivering behind the stirring percussive rhythms banged out on stupendous Japanese (via Chinese lineage) drums, gongs, bells.  The precise ballet of the performers striking the various sized drums with their bachi was an amazement of power that transcended, somehow, the human state.  It became as timeless and deep as the place we were seated, occasionally wet by drops of water falling impassively from the stone ceiling into our laps, into our hair.

The sound entered our bones.  It changed us mineralogically.  Place and history meet at one strange moment, an intersection that is counted in an infinity of seconds ticking rhythmically, and we realize we are moving down the waterway from here to there.  Ephemera laid down in stone.
Posted by Melissa Holbrook Pierson at 7:19 PM 5 comments: