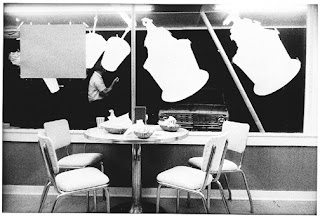 It's one week till Thanksgiving, the one holiday that so far has escaped total cooptation by pop-up stores and cynical commercial grabs; I'm not even sure they make Thanksgiving-themed Peeps, but I'm sure to be proved wrong about that.  Still, it retains a certain old-time purity, although I make it a point during the usual public grace lauding friendships and blood ties to say a silent thanks to the Indians for letting us kill them and steal their land.

I wait for my salmon burger in this place that has long meant home to me (although, truth be told, I was more of a Veselka girl myself, venturing to the Second Avenue Ukrainian coffee shop for three-dollar pierogies and potato pancakes once or twice a week).  Who can't love New York City: at the table next to me, a Jew and an Irishman talk, in a Ukrainian restaurant; then in walk four fellows who look nothing if not Mongolian.

Courtesy of the window onto the street in front of me, I practice my backward reading.  We really don't do enough of that, you know, after age ten.

A poster taped there, advertising its come-on to passersby on the sidewalk, can be read from the back:

*as I can attest, this is more likely to be a "thimbleful" of "wine"

It takes a lot to be alone for Thanksgiving, the quintessential family meal (which I haven't shared with my actual family for decades; until recently I celebrated it with my misfit friends, which meant we were more firmly cemented than by genetics, being the chosen rather than the pressed upon).  One year, and one year only, I made the bright and bad suggestion to go traveling for Thanksgiving, and we spent the meal, two of us, in an otherwise empty hotel dining room.  I've never felt quite so suicidal while still wearing a brave and utterly false smile for two hours.

My heart breaks for the people who will come, alone, to buy the Odessa special.  I wish I could invite them all to my home.  I won't serve cream of turkey soup, though.

Non ignara mali, miseris succurrere disco.  "Familiar with misfortune, I learned to assist the unfortunate": Virgil's Aeneid.  That sounds bigger than I mean it to.  But it is a small reminder to myself, a future job.  And a wish that around every table in the Odessa there is more than one chair. 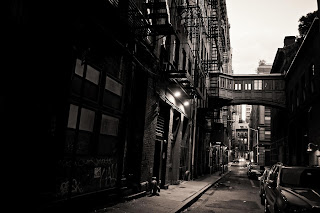 A thoroughgoing rube from the sticks now, I had almost forgotten how a city dweller is a flea in the flea circus: most of the time low, invisible, touching the ground.  Then, suddenly, vaulting high.  You can always count on unannounced possibilities for temporary transformation, the chance to spend a night passing as someone you were never born to be.  You don't know exactly where you're going, but you go; and sometimes afterward you still don't know exactly where you've been, except that the air was thin up there.

What's going on this weekend? Maybe the question wasn't even asked, it was thought, and only electrical impulses passed among friends.  Party on Lispenard Street would come to you Friday afternoon, and past darkfall you were walking alone down an empty street, watching for a single row of lights on a fourth floor somewhere along the block.  Whose place? Who knew?  Party the only information  necessary.

At one--all I remember was huge, dim, crowded--I stood in line for a drink.  The girl behind me struck up a conversation as we waited.  It was a long queue.  It was good, therefore, that I felt I could listen to her British accent, creamy rich, forever.  She wore a silk cocktail dress from the fifties; she worked in a thrift store in the Village.  Whatever it was we talked about, it was lively, full of bubbles, and once I had my chardonnay in hand I turned.  "You aren't going to be one of those people who take someone's number and promise to call but never do?" Her swift arrow flew straight.  It was one of the most galvanizing, and brave, questions I had ever heard.  The friendship it caused has spanned thirty years, three continents, and two marriages.   All from a chance meeting in a chance place.  That is why you wanted to live in the city in the first place, and forever.

Twenty years later I asked her if she knew whose place that was.  She named a famous (and famously bitchy) British expatriate fashion editor.  Who knew?  See.

To prove you can go home again, only you may not quite recognize the place anymore, this week I again received an invitation: friend of a friend, downtown, like before.  Only now there's a specific address, and there's Google.  With its real estate tabulations that tell you exactly what the penthouse loft went for last year.

I went to survey my closet, only to find it full of the same things that were there ten years ago, and ten years before that. A shopping expedition was in order, but now there were no sales racks at Saks and Bendel's to haunt every lunch hour until something eventually showed up, in my size and in my hands: what a steal.  Feel that tissue silk?  An editorial assistant had no business owning something so fine, except she did, by effort and a little magic.

Now and here, though, the only option was J. C. Penney at the rural mall.  How is that thirty-dollar frock going to go down in the loft of today, no longer dimly lit raw space with blowers hanging from the ceiling, but the Sub-Zeroed, Wolf-ranged domicile of the one percent?