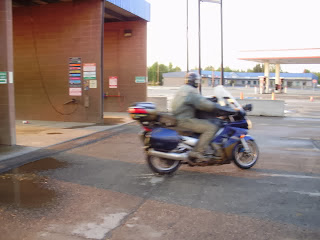 This is not the way to do this.  When there are no words.  When loss, like the centrifugal carnival ride with the floor that suddenly drops away, pins you helpless against the wall.  You hang there, wondering only when you will fall.  When the world stops spinning, I suppose.

It's too new, this news.  I have nothing cogent to say about it.  I can only tell you what happened.  It was uncanny, in its way.  In the way, come to think of it, of everything that had to do with this man who to me seemed larger than life.  Because he encapsulated everything you could really say about life's grace, its gifts, its terrible, terrible uncertainties.

Last night, happy: on the road.  For three days, going to all the places the motorcycle can take one.  The dinner out you give yourself, after a long day of riding, all the stops pulled out.  We had been talking about calling John Ryan, to thank him for yet another gift.   This ride, and this company.  Only we waited one day too long.

First, one message: Call me.  It's about John.

Next, another message: Is it true, what I read?

Then I knew.  It was too late to say thank you.

All the way home, today, the wheels repeated their messages.  First, the uncounted gifts.  He changed my life.  He gave me a new subject; he gave me a return to motorcycling (he, alone among all, would not rest until his mission was complete: he knew I needed to ride again, and he would not rest until I did); he gave me so many new friends I was startled with the recollections after every turn: Oh, and her!--and her!--and him!--and him!   On it went, through gas stops after the tank was filled, then drained by the miles through an autumn world where trees were afire, soon to be ash (but risen), then filled once more.  I remembered another gift, another, another.  Then I realized: No one had changed my life more than John.  The generosity he experienced was motorcycling's: its curious solace.  The generosity he passed on to innumerable others was particularly more.  Once, he literally gave me the shirt off his back.  I was cold; here, take this.

I will leave it to others to add to the ledger: we may never be able to fully account for what John Ryan gave us.  One by one, we will come out with our stories.  And they may well be endless, unlike John himself.

It was like a sucker punch.  I didn't see it coming, only felt its effects.  A sickness.  Maybe a cry; I don't know, I was hustled out of the restaurant.  For an interminable moment I sat outside alone on a bench, howling to the moon.  Animal anguish has no words.  This death, so far, has no words, but it has already amassed some miles.  He was there, riding not alongside me, but far ahead.  Always, he will be there, vanishing in the distance.