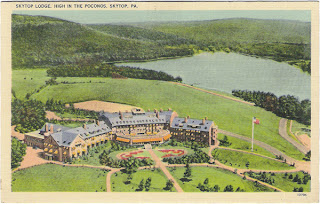 To get to 1928 from my house, I discover, all I have to do is drive two and a half hours west-southwest. After turning in at the driveway of the Skytop Lodge, from a deeply shaded road through the lonely forests of Pennsylvania’s Pocono Mountains, nearly a century drops away while attaining the final hundred feet of altitude on the climb to the mountaintop hotel.  And there you are, in the heady days of the Jazz Age, when vast hotels were rising all over America as precipitously as stocks.

This one was conceived in 1925 by men of foresight, though it did not extend as far as late October of 1929.  The building is especially momentous, of stone in the Dutch Colonial style, with massive wings reaching out to either side of the entrance like welcoming arms—not a raucous welcome, to be sure, befitting a certain age-appropriate reserve, but welcoming nonetheless.  Well, so long as you are of the class that will not blanch at the tariff: $499 a night, double occupancy.  Not as much as the modern-day luxury spa, of course.  But then most spas don’t offer a Saturday-night Elimination Dance and Grand March.  (“Everyone is holding hands in a long line . . . then we weave in and out of rooms through a secret passage, outdoors, then back in the Pine Room.  The festivities conclude with punch, cookies, and dancing.”  So much more Nancy Drew than a sea-salt bodywrap, yes?)

That spa—though even Skytop has stuck a toe in twenty-first-century waters by retrofitting spa-treatment rooms into the top floor of the hotel, taking space from the diminished members-only club that was once an integral part of staying here—also probably won’t ask guests to dress for dinner, or to refrain from wearing anything too modernly disturbing; only “modest” and “generally conservative” (one in fact assumes that most of the visitors are registered Republicans) will do around these 5,500-acre grounds.

In keeping with a general theme of traditionalism, the activities speak in cultivated tones of yesteryear’s pastimes: lawn bowling, archery, skeet shooting, boating, skiing, tobogganing, and hiking.  (No way to escape golf, no matter what year it is.)

The basement game room has acceded to recent—albeit not too recent—taste with a small arcade that includes Galaga, which after all is ancient history to anyone now under the age of forty, though it happens to be my ancient history.  There remain the tables for billiards and ping-pong, and a cunning miniature golf course for the wee ones.  Upstairs are the de rigueur card rooms off the grandly scaled main room, as well as a beautiful lending library whose titles, Dewey classified, reside timelessly in glass vitrines.  The books remain also timelessly undisturbed, for no one who arrives from this century seems to know their purpose.

At dinner in the main dining room, I explained to my twelve-year-old tablemate how all these knives and forks were to be deployed, elaborating further on quaint dining customs of yore: “In real olden days, one would be given a fingerbowl.  But don’t do what a friend once did when presented with one—he drank it.”  A few minutes later, fingerbowls arrived.  “For your fingers,” the waitress offered helpfully.

My son (the aforementioned twelve-year-old) brought to my attention the detail that marked this as a veritable old hotel: actual room keys, dangling from those plastic rhombuses so redolent of vacations past.  No key cards for the Skytop.  I hadn’t even noticed, which shows how old I am.

At night we mounted four flights of stairs to the top floor pressed under the eaves, heading for the old observation tower.  At the foot of its narrow staircase, before ascending a dark tunnel-like space that opened onto a slightly less dark but immeasurably expansive space—the curvature of the earth was visible on a horizon tinged light rose under the gigantic bowl of planet-studded sky—a plaque commemorated spotters who during World War II manned the post around the clock watching for enemy planes.

What stay in a long-lost era would be complete without discharging a firearm? This is where the wheat gets separated from the social chaff—or perhaps where redneck and elite join in agreement on one thing (besides low tax rates for the wealthy): guns are fun to shoot.

Meeting at the obligatory Orvis shop down by the obligatory lake, excursions to the mountaintop skeet-shooting center are conducted by van; it takes you to 2,200 feet and a supreme view of this heavenly half-acre.  There, in the far distance, is the Delaware Water Gap, and for the first time you see exactly what it is: a symmetrical deep notch carved by a giant precision instrument.  After the Civil War, this region was second only to Saratoga as the country’s most popular inland resort.  Now, in the near distance, orange compact sporting clays are mechanically flung into space, and bang! They magically explode into shards.  Suddenly, you can’t wait for the next one to do the same.  Then the next, and the next.  It’s addictive, this focused destruction.

And, you realize, necessary: in fact, when mealtime arrives with its caloric load you see you needed to engage in every sport on offer; there are three of these abundant occasions per day (on the American plan, correctly named) plus tea and cookies in the Pine Room at four.  Though sometimes it is advisable to join the two, intake and expenditure: that is when you order a box lunch (I just love saying that: box lunch box lunch box lunch).  It will accompany you on any one of multitudinous trails, amounting to more than thirty miles, meant to guide guests to “places of quiet beauty and restful charm”; when you reach the end in addition to peanut butter there may well be Indian Ladder Falls.

At dinner you are attended with the miracle of two types of service at once: nearly invisible, and ever-present.  The menu offers delectable-sounding opportunities in the appetizer, soup or salad, and entrée categories; and if what is delivered with care to your place is just a sliver under delectable—falling rather into tasty ’n’ ample, a variety of Institutional Haute—what cynic could truly complain?  You’ll revisit your hopes at the breakfast buffet, complemented with table service of eggs aplenty as well as Belgian waffles.

The visit to another age, a black-and-white one where cherry-lipped, wool-clad, bobbed-hair women lean ever smiling against their ski poles and sleighfulls of laughing young people are pulled by strong horses through the cold air, is a reminder of what we used to be.  And trusted we would eternally remain.  Healthy, joyful, always festive.  Always beautiful.  Always well-heeled.   There was no end to the bigness: America ascendant.  The grand hotel provided the frame for the picture we wished to make of ourselves.  It was carefully posed; it seemed possible, within its bounds, that life itself could be an endless holiday with impeccable service.  This was the period Booth Tarkington compassed in The Magnificent Ambersons: “’There seem to be so many ways of making money nowadays,’ Fanny said thoughtfully. ‘Every day I hear of a new fortune some person has got hold of, one way or another—nearly always it’s somebody you never heard of.’”

In some places today you can catch the scent of the belief that the future holds the promise of permanently expanding luxury, no longer thrillingly sharp, but soft and vague, the perfume that rises from a vintage fur.  At these historic hotels that preserve the happy traditions of privilege, the past comes back as a memory you are not certain you ever had.  It is just possible you read about it in a book, or saw it from afar, in a dream from which you wished to never wake.   The times will never roar like that again.

Posted by Melissa Holbrook Pierson at 8:31 AM 7 comments: