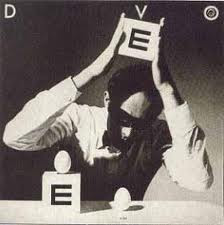 Times have changed. Everything has changed.

Well, maybe not the fact that it is the nature of all things to change; but everything else. Take Devo, for example.

It was probably 1975 when a few of us convicts, er, boarding students escaped campus one night. This was verboten. Boarding students were to stay on campus, in dorms or the library, and we had a curfew. But we also had day students, who had access to cars, and those cars had floors, which were convenient for hiding boarding students until the edge of town. Furthermore, we had Kent to lure us away . . . a university town, which like Oz rose majestic in our imaginations with glittering promises. Those were called bars. With beer, and music, and everything.

Sometimes the school deployed professors to go hang out in Kent's bars to catch us--probably not a bad Friday-night assignment--but this one seemed devoid of official presence. What it did have was a band, announced with a silk-screened poster taped to the door, that none of us had ever heard of. No matter. We were going to hear, plenty.

They began the show with screenings of some grainy 16mm movies of the type once called "experimental." The experiment in this case succeeded, brilliantly. I was stunned by what I saw, like nothing I'd seen before. I knew I had just walked to the brink of a great canyon, with a breathtaking view of the future.

The band followed the promise of its short movies. Together they were sarcastic, nutty, mordant, and finally really, really smart--exactly what I liked, even if I didn't know it quite yet. (Perhaps because both bands were started by art students, and this touched their music, their gestalt, in similar ways, I would have similar feelings when I heard, on my college radio station, a song called "Psycho Killer." Instantly I knew I would never be the same again. I wrote my senior thesis to endless spinnings of Talking Heads 77, which might have had something to do with the way it turned out.) After the show I went up to the one or two Devotees to babble incoherently, though I was trying to say how I had seen something new that shook me from top to bottom, and thanks for that. I did mention my belief that they should get out of Kent--they were obviously too big for Ohio--and go to New York City. "We're thinking of doing just that," one of them said. (A couple of months later I saw Devo perform in the basement of the Akron Art Institute, where they confused the audience into near silence; these were not college-town bar patrons for sure.)

As I left the bar, I ripped the poster off the door.

There is a recent interview, here, with band member Jerry Casale in which he sounds depressed and bitter, as well he might. He describes a situation that is little remarked on: it is not just "the" middle class that has vanished in the United States; it is also the creative middle class that has been squeezed into nonexistence, between a vast population of working artists who can no longer hope to make a cent and the 1 percent that will make killing in the corporate marketplace and get covered by Entertainment Weekly. Musicians have nothing to sell anymore; when Barnes & Noble closes, following the final disappearance of most independent bookstores, authors will
join the ranks of the newly unpaid "content providers," which has become the fate of most other writers who used to be able to cobble together a living writing for print.

I found the Devo poster in my closet when I was cleaning out my childhood home a few years ago. Unearthing it from where it had lain under the bed for decades was like finding a priceless artifact from an ancient civilization. I put it away somewhere, and am counting on finding it again sometime. Hopefully soon.

Posted by Melissa Holbrook Pierson at 6:48 AM

We ARE Devo! I was in town a few years ago for a conference at SH. I had to be up and out by 7am in order to "confer" at 8am. My daughter, then about 21, was with me and we stayed at the old Quaker Oats Hilton. Coming down Main Street after dinner we saw that DEVO and Chrissy Hynde were playing a Democrat benefit at the Civic Theater! It was 9:30 and the concert had been going for a bit but there were still some seats in the rafters. As I had a bit more to do in preparation for my talk I decided it would make more sense to go back to the hotel. WHAT WAS I THINKING?

But to think that you saw them back in the day. Lucky gal.

After reading and re-visiting, I keep thinking of two particular songs with very different outlooks on change. The first, the powerful anthem warning people to get ready because,"The Times They Are A-Changing".
The second, containing the unapologetically cynical declaration that "I used to care but, Things Have Changed".
So two songs,differing in mood and message, yet each conceived by the same Bob Dylan. One possible reason for the contrast in perspectives: the songs were from different albums, with almost forty years of life experience in between them.
Hang on to that poster!

Yesterday I was listening to a new Dylan, "Love Sick," in the car on the radio. Then went home to play a collection of Frank Sinatra that had been given to me. It suddenly occurred that Dylan (at least in that song) was the anti-Sinatra. But put together, in a very strange way, they are also the same.

Not exactly what you were getting at, Kevin. But also, maybe . . . yes.

I don't think many of us would like going back to the Tower Records model of the music industry. Driving to a store to hopefully find a CD for $16. A CD that cost 25 cents to produce and lasts 2 months before it has to be replaced. Just saying.
It seems now bands rely more on live performances for money which is good. Maybe for some of the same reasons bookstores will survive because people want an experience, like the time you signed my copy of your book at the Motorcycle Show. I hope so.That was cool. I don't want to live in a world without books stores or bands playing locally.
But I think the big days of big record contracts are probably long over. The real scary thing is just how preoccupied everyone seems to be. No one I know seems to have enough time or energy to care about art. And I say that as an architect who knows that even fewer people care about architecture either, except for a very few who hire "starchitects" like Frank Gehry.

Hey, Sal--I care about architecture! Deeply! I've even weighed in on it, to others' quiet despair no doubt, in this forum.

But you are right about the aura of preoccupation right now. The depth of attention required to get lost in appreciation of frivolities like art seems hard to come by in the present moment.

And I suppose you are right about music, too, though I remember with fondness the excitement of release day for a favorite band's album, and the compacted energy when we descended on the store at the same time. I can only hope you are right about the continued existence of books and the stores that sell them; some of the signs are not good. Perhaps they will become rarefied things, made & bought in small batches, like boutique bourbon.

Had to find "It's A Beautiful World" and listen/view again. Funny, in a sad way, to observe how that band has been mimicked in so many ways over the years.

FWIW, staying hungry seems to be the proven formula. Poets, artists, songwriters, authors, film makers, etc... probably need to remain tortured souls in order for them to give us the really good, raw stuff. There will always be a niche market for their good works.

Unfortunately, it likely won't land them that piano-shaped swimming pool in their backyards!

Thanks for the writing, too! It's been years since I thought about DEVO.

What's that saying about imitation and the sincerest flattery? Yes, Devo is a little easy to mimic, but not replace. They did some things first, out of sheer necessity. And yes, they were young, hungry, and unsung. I sometimes feel afraid that I did my best work late at night, driven by churnings of emotion and desperation that I am not altogether sad I don't feel in the same measure anymore--except when it comes to my nonexistent poetry output.

mark M draws for Yo Gabba Gabba, everyone sold out. punk is dead.

but I'm drunk, so life is good happy valentines day!

But maybe punk will come back to life in some other form, when there's no longer anyone buying what we're selling out.

Happy post-Valentine's Day to you too. I was drunk, but I took a day off to dry out. Now I'm drinking again. Yay.