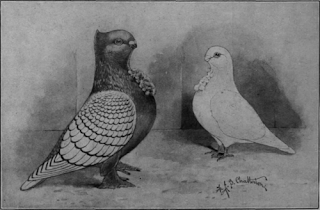 Outside the Key Food on Avenue A and Fourth Street, the woman was in deep conversation with the man, her hand firm on the baby carriage. A black and white pigeon perched on the carriage's cover, just inches from the sleeping baby, and that's why I stopped in my tracks after exiting the store. I was curious as to what exact form the gasp would take when she finally turned and saw what was there: a scream, an obscenity, a violent expulsion of the dirty feral beast? Instead, it was my gasp that was heard in the next minute, for when she said goodbye and in the same movement turned and leaned into the handle to push forward, she never blinked. Nor did the pigeon. Instead, all three made their way down the avenue, each in their own private world together.

Oddly, I had just been writing about pigeons a few days before, considering them in all their myriad fascinations. Here is what I wrote.

Close your eyes for a moment. That is when you first begin to truly see them, soft clicks and coos making them present to the mind’s eye. For they had become invisible to true sight, like the impulsive yellow cab drawing its line down toward disappearance or the girl with a phone pressed to her ear, the scaffolding draped in black cloth and the concrete planter containing something (you never notice what) growing from cigarette-ash-flecked dirt. The elements that make the city what it is, the sudden absence of which—any of a thousand thousand things—would render it preternaturally strange.

Now you may look. And finally see. The pigeon reveals himself in paradoxical beauty: omnipresent, yet startlingly singular; a moving iridescence in the colors playing along neck feathers against a body as gray (and common) as pavement. They are maligned as “flying rats,” but from their point of view we may well be walking rats.

The flocks that move as one corps de ballet when startled from their crumb foraging in New York City parks (and that leave unsightly reminders of their species preeminence in numbers second only to the real Rattus rattus, though behind Homo sapiens, causing city ledges to be bristled with nest-prohibiting wire spikes) are composed of extraordinary individuals.* These are the birds that mate for life, and raise their young together. These are the feral, or rock, pigeons descended from the first domesticated variety introduced to North America, through Nova Scotia, in 1606. These are the pigeons who received 32 medals for bravery in World War II, and who helped build the Rothschild empire from lofts built for them throughout Europe in order to deliver information between the family’s financial houses. These are the animals that in 1850 began carrying news for an outfit called Reuters. These are the birds selected in 1944, to take part in the U.S. military’s top-secret Project Pigeon, conceived by a psychologist named B. F. Skinner, who codified what he learned from how they learned in a new science called behaviorism.

These are the pigeons who live in New York, and who are not seen.

What would the city be without its reminders that beyond our human horizon, the persistence of the larger world in which we came to life still pushes up from the earth between sidewalk cracks, still visits from the sky we have yet to enclose? The city would be silent without its gray denizens, its birds at once common and unknown. The city would no longer be itself.

* Like us, perhaps? --In our human flocks, foraging for crumbs among the skyscraper nests of our own intelligence.

And with this ends, or for an indefinite hiatus, "It's Nelly's World."

I hope to return (if one can return to these ongoing things after an interruption; perhaps they necessarily vanish into the electronic ether, but I'll find out if I try to take it up again sometime) when I manage to arrest a downward spiral. It is time to turn all my energy to that, for as you know, a boy and a dog are depending on me.

I owe you all much gratitude, for reading, for considering, for contributing your thoughts, wisdom, humor, and well-deserved kicks in the seat. They will serve me well.


Posted by Melissa Holbrook Pierson at 6:31 AM

After reading your piece about les pigeons in French, I realized how ignorant I was. I knew a few things about les pigeons, mais the fact is that your wrap of information is so well done that it changed my perception about those birds.
Thank you again for your wisdom!

just noticed a pigeon at the bird feeder (kinda rare here), enjoyed seeing it, all are welcome here.
have enjoyed your blog over the years having found it after reading 'perfect vehicle'(paid full boat for it, was worth every penny)
thanks again

I am dissapointed but I guess you can't keep working for free. Best wishes and thanks.

I am most definitely going to miss this blog.
Nevertheless,good luck, good health and a sincere thank you.

your blogs will be missed.

Thank you, Sal, Kevin, Pierre, Steve, and all my Anonymouses (Anonymice?). I will miss you, too. This is not to say that I am "gone"--no, I am very much here, and trying to get more *here* all the time. Transmutation, in a way: I want to write deeply and more, and in order to do that, I need to make enough money to permit me to continue. (I'll be writing during breaktime at my new job at Walmart. . . . That's a joke, I hope!) I'll be back, I promise: some time, in some form.

I love you all.

"Thank you" doesn't really express how much I've appreciated reading your blog. Sometimes a different perspective, an observation about change or sharing a memory; I've found enjoyment or comfort here.

Thank you, Melissa. Best wishes in your work and home life.

Steve, the loss is truly mine: this came home to me most poignantly tonight, driving home from motorcyclists dinner. This is the night I would look forward to staying up late, lost in a private conversation with friends both unknown and unseen. It was something always to look forward to. I appreciate you being out there, listening. If not for the knowledge you were there, I would have been silent. I'm glad for the time of talking.

I'm going to miss your thought provoking insights and always sharp prose. Thank you for your talent and efforts. But please do what is necessary for yourself and family. As much as we readers enjoy this blog we will survive the hiatus. And don't forget--keep those (two) wheels turning. Even a little helmet time can be very theraputic. But then you know that, right?

Tom--yes, I do know that. I am going to try to wrest any moment I can out of the schedule-keeper's hands to use it for that two-wheel therapy.

I will do what needs to be done.

Oh t returned to Wisconsin after a few weeks in Ithaca, the Adirondacks, Montreal, Albany, etc….and check in to get a little wonderful insightful prose that might occasionally hit on my two-wheeled problem. Sad for us all, Melissa, but I really hope all works out well for you. We’re moving and were looking at options for the freshly-minted PhD in the house (New Paltz is one) and I was looking forward to keeping my eye open for a Lario on the old GS.

Bert, you will indeed see me on some road or other: the paved one; the one that leads forward from here; the one on which I meet the others that have become a circle of friends even if I've never met them.

Some are real, and some exist only up there, in the mind. I like journeying on them all.

I'll be back. Thanks.

Hi Melissa - As part of the upward spiral to come, let me say I just discovered you through the mediabistro class you're about to teach, and I'm thrilled to find another Geoff Dyer enthusiast (why aren't there more in public?) Anyway, I hope to take some sort of online class with you if and when it's not part of a giant magilla conference thingy... are you planning to do more if that goes well? thanks, bill lattanzi

Bill, just a few days ago I said to my editor, "I think I want to BE Geoff Dyer."

Thank you for positing an upward trajectory; all this spiraling is making me dizzy.

The Mediabistro class has a ceiling of 15 students, and may well enroll far fewer (since I am not in fact Geoff Dyer). So you can keep in touch with me about that as time goes on, if you like, or stay tuned as I am indeed thinking of offering online workshops under my own auspices.

ha! of course, I'm working on being the american male geoff dyer, so you can be the american female geoff dyer... btw, I mentioned this to a book agent myself and she told me it was a quote "terrible" idea. thanks! (and isn't that a dyer moment if ever there was one.) cheers!